The other day, one of the students in aftercare needed me for something.

"Mr. McLean!" she yelled from another room.

I know that I've only been a teacher for a very short while, but seriously, how can anyone ever get over the power trip of being called their dad's name?

It was a girl who was being tutored by Katie, one of the loyal followers of this blog. The student was working on geography homework in a nearby room, and she apparently had a question that only I, in my infinite wisdom, could answer.

"I have a question about Canada," she said as she ran up to me.

Help a curious student from the South learn more about Canada? Okay!

"Fire away," I responded.

She showed me a map of North America. Her assignment was to locate coordinates on the world map, and report what was nearby. Her calculations planted her here: 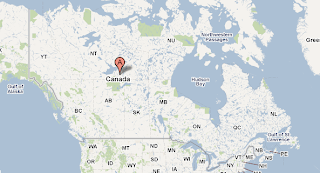 Fear swept over me. As a Canadian, I have a humble pride in my country, though I usually make fun of it. I also tend to thump my chest about how rad Canada is when I'm around Americans. But hell if I know anything above the 50th parallel.

Quick as a flash I access the internet, and zoom in on the area. Yellowknife, it turns out, is north of that very big lake, not south.

"So what's near that spot?" she asked.

Silence filled the room. Dejected, I turned to her. "Nothing. There's nothing there. Tundra."

What a fine lesson in Canadian geography. A chance to sing of the magnificence of our confederation, the beauty of our landscape, the superiority of all things Canada. For all intents and purpose, however, I reinforced the American image that Canada = a few major cities and an endless winter wasteland. 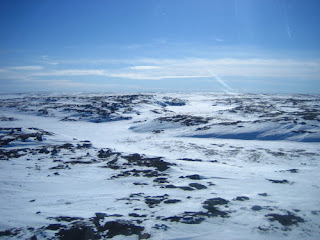 Incidentally, it seems that the spot she pinpointed is a body of water called Tortuous lake. Charming.
Posted by Mark and Denise at 7:47 PM