The Awesome Power of Mark McLean and the United States Government.

Welcome Ashley! Does this mean that your husband will be coming out of the woodwork, and stop creeping on us? Love your blog, by the way.

We've returned from Las Vegas. Overall a rad experience, and I was proud to watch Tyler marry Amanda. Congrats guys. I'm pretty sure that Denise wants to do a lengthier Vegas post, and since that city courses through her veins, she'll certainly do it better justice than I ever could.

No, this post is about the eerie power that I and the TSA possess.

First off, for part of the bachelor party, we men headed for the gun range. Never shot a gun before. Never held one. There were several options, so they gave me the "Coalition Package", a pretty tame collection of guns designed for the dumbass who doesn't know what he's doing (me!). They're pretty new weapons that are easy to shoot. Along with the guns, I got to pick three targets from about a dozen choices. So I chose a creepy looking dude holding a pretty blond hostage (this came first so that it would rouse a sense of justice in my heart), a zombie clown wielding an axe (this came second so that I would feel the urge to shit my pants, like in the movies where the hero faces adversity), and my third one...oh hell, why not shoot up Osama bin Laden (this came last so that I could feel better about fearing the clown. Plus how could you come to America and pass up the opportunity to shoot Osama? To not do it is downright unpatriotic.)? And so I shot him with a pistol.

We went to dinner immediately afterwards, and that's when word trickled in: Osama bin Laden was shot and killed.

I expect compensation any day now.

Ok, second. When we got back to our apartment, we began unpacking. I took off the lock that kept the zipper on my luggage closed, and started rummaging through my stuff. On top of everything, was a little pamphlet from the Department of Homeland Security. It was the TSA, telling me that regrettably, they had to search through my bag, and they hope nothing was damaged. 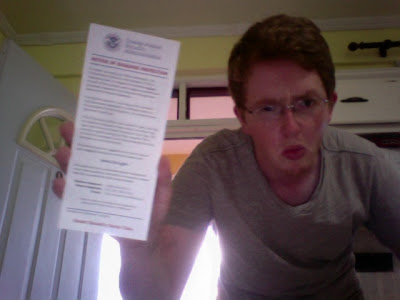 So in one hand I have the pamphlet, and in the other...my lock. Which I had just unlocked. There is no physical way for that pamphlet to have gotten in there. What the hell? I knew the US government was powerful, but damn! There is only one explanation. The Department of Homeland Security has developed a teleportation device, which they used to plant this pamphlet within my luggage. I am in awe.

I still use my lock for the gym. I will never, ever again doubt the power of our neighbours to the south. Er, I guess to the north now.
Posted by Mark and Denise at 3:47 PM