Yesterday I took a cab from my house to the campus. I do this every Wednesday morning, transporting Island Thrift's two tables and three luggage bags of stock back and forth. We have a regular cab driver named Roy. We've got an agreement with him, and he exclusively gives us rides for a fair fee (12 EC, or 4.50$ CDN, each way). Other cab drivers tried jacking up the prices on us, but Roy didn't, so we made an arrangement.

When he drove me in the morning, we got caught behind a dump truck on Moo Cow Trail, which was slowly moving between each house, blocking the entire lane, and taking their time with each garbage bin. The smell was horrendous; Roy stayed back fifty feet and still we could smell it. Roy, an honest, easy-going kind of guy, got really worked up about them. "You wouldn't find this shit anywhere else in the world," he told me. The garbage men have a terrible reputation for taking a long time and leaving a smelly mess everywhere they go. Honestly, it's a health hazard.

Meanwhile, we met our landlord the other day, who normally lives in Barbados. He's one cool cat. We invited him into our place, but he said that he didn't want to invade our privacy (this a nice change from our old Spanish landlord, who would refuse to take off his shoes, because of his Spanishness, and often peaked in our windows). He also apologized for how long it was taking to fix our Air Conditioning remote control, without which we can't turn the machine on. He talked about how services here should be much better, considering many of the technicians and other tradesmen are trained in the States, then come back here to work. He seemed to consider them an embarassment for Dominica. 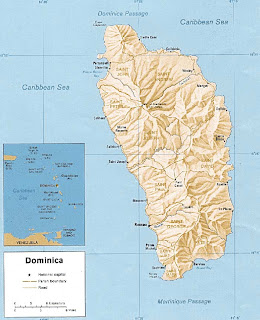 Increasingly we've been seeing a kind of culture clash going on around us. Some of the people here are trying to shake off the image of a lazy Caribbean way of life. Most go along with the culture, which Ross students and spouses call "Island time" (meaning whatever you're trying to get will take a very long time to get to you, not necessarily because of geography, but because people here are in no rush to help you). Frankly, it's frustrating when you're used to North American customer service. There's no reason that most services should take as long as they do. I think that as the island develops from a third-world country, more and more businessmen are trying to change the culture of how people work here, and it's evident that they're exasperated. It's certainly an interesting dynamic.

Either way, it's comforting to know that we're slowly figuring out whom we can count on, and who will suddenly jack up their prices or take a long time to do a simple task. I hope that in the long run, those that work hard here are rewarded.
Posted by Mark and Denise at 12:51 PM