Denise and I have been house sitting this place for a friend, the last week or so. We weren't able to stay there for the first few nights because Denise needed to stay close to Picard in order to study for her mini (which, by the way, she slapped around pretty thoroughly), but this week we were able to spend a few nights up there. We also, perhaps more importantly, were given access to their car.

The house is gorgeous. It used to be a bed and breakfast with three rooms, but then got converted to a house for a family. They have three cats there, and one dog who lives outside. There's a porch that runs all the way around the house, so you can get a lovely view of the mountains, or of the ocean, or of Guadeloupe, the neighbouring island here. 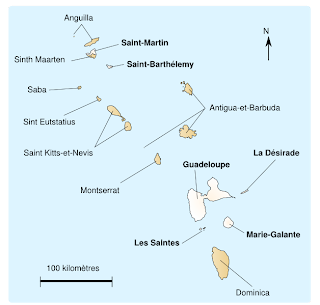 It's been nice having a car. I can feel all manly picking Denise up and dropping her off places, I can help people run errands, all sorts of crazy stuff. Of course, since it's Dominica, the car is driven on the left side of the road. Surprisingly, having the car physically on the other side of the road isn't what messes me up. That part's simple enough, and for the first few drives I had to keep muttering to myself "Stay left...stay left..." Turning is also kinda weird, since you have to rethink who has the right of way (not that it matters here, people just give 'er). The weirdest thing is that all the gadgets on the dash board are flipped. So if I want to switch lanes, the lever for it is on my right, not on my left. Many a times I have tried to switch lanes and have turned on the windshield wipers instead.

I also feel as if Grand Theft Auto has trained me for this. Driving in this country is like passing an obstacle course: there are pot holes, chickens, stray dogs, goats, cars parked in the middle of the street, the car ahead of you will suddenly stop to talk to someone, there are no speed limits, there are no comprehensive laws on parking whatsoever, the roads themselves can be barely a single lane, and all the while you have to keep muttering "Stay left...stay left...". In the end, though, Denise and I will be bummed to have to give the car back.

Denise and I will likely be house sitting for another family over the break. Really, it's just nice to stay in a nice place for awhile, and have access to a vehicle.

This is a video of the place, as well as us driving back into town. It's 4 minutes long, but if you get bored, you can click on one of the S-Club links on the side:

As a side note:
Our blog has recently, inexplicably, become very popular in the States. In fact, we have already surpassed our monthly record for views in March, and it's only the 20th. While we would like to think it's because we're really cool and articulate, detective work showed that, for some reason, Americans were googling the word "Conch" a lot lately. And, for some reason, it brought them to a post of ours back in October, with a picture we ourselves took from Google. We're averaging about 40 hits a day on this one post, because of this one picture. If we get any more attention, at some point some one will notice that almost none of our photos are ours, but are taken from Google Images. Gulp.
Posted by Mark and Denise at 3:08 PM