Welcome Kristin! Glad to hear you're reading our blog.

Pardon me for some Canadiana here, folks. This post is entirely about hockey: some of my thoughts post-Stanley Cup. If you're not a hockey fan, I highly suggest you don't bother reading it. You are forewarned.

As the NHL playoffs end, a few things are on my mind. I've organized it in subjects that the average person could give a shit about, so the further down you go, the more specific your interests must be.

As I've mentioned in previous posts, Canadian expats have congregated to create a street hockey league. Our current team, "We Boned Your Mom, After we Wined and Dined her, and Don't Plan on Calling her Back", is 0-3, but we've been playing well and I expect us to make the playoffs with a little luck. Here's the logo we'll probably be going for when we make our jerseys.

The Team in Winnipeg


I admit it, I thought this would never happen. I was one of the naysayers, who would calmly take excited future fans aside and patronizingly explain to them that it will never happen. I was wrong, and I eat my words. Now, I am so freaking pumped that they'll be there next year. 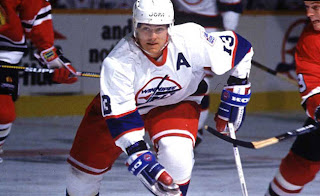 It was quite a dilemma for me, when the announcements came in. I bleed blue and white as a Leafs fan, and I wondered: did I have any room in my heart for another team? The answer is yes: like a father who loves his teenage son and has an accidental second baby son, the love I felt does not need to be shared, but grew to encompass both teams. Don't ask me what I'll do when they play each other. I may have to be lame and just cheer for everyone.

I hope they come out with the name soon, it's killing me. Word is that they want to call it the Moose because they'd spent so much money on branding, but they're terrified of public backlash for not calling it the Jets. To be honest, I could care less. I don't put much stock in a name, as long as it's not hideous. The Penguins are a respected team, yet the animal is kind of ridiculous (and cute). So long as we don't call them something like, oh I don't know, THE EDMONTON SWASTIKAS?!?!?! 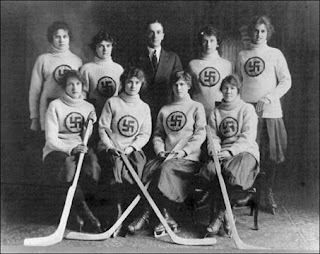 For a final that I was dreading from the opening round, this series was hugely entertaining. The first two games were a snooze-fest, but Boston routing the Canucks was, as my sister described it, an Emmy-worthy occasion. This is not only because I vehemently dislike the Canucks, which I do, but because it changed the pace of the series, and made it one of the most interesting turn of events in many years of playoff hockey. Really, in the end, I wasn't so much happy that Boston won, as I was relieved that Vancouver lost. When the dust settled on the series though, I knew I would be bummed either way. It really was an amazing playoffs, and Canucks fans should know that they'll be back - the core of that team is locked down for years.

It was a tough series for me to watch, because Boston and Vancouver are two of my three least favourite teams (the third being New Jersey, partly because they play the trap, and partly because they kicked the Leafs out of the playoffs like ten years ago, and I've never forgiven them since). I have to hate Boston because I'm a Leafs fan, and since the Kessel trade the animosity has been building between the two teams. I have to cheer against them if only to prove that the Kessel trade screwed them over (which, it appears, it did not (shit)). As for Vancouver,  I really did try, for several years, to like them, but the reasons not to piled on. Here are a couple of them:

1. For years I took a lot of crap from Canucks fans for their illogical hatred of Leafs fans. As in being physically threatened, even though there is no cultural, geographical, or historical rivalry. It made no sense. I can take the heat from Habs fans, Sens fans, or any other rivalry that has anything based in reality. I respect those rivalries. The Canucks hatred only develops a complete disrespect in those listening. I'm not about to turn around and join a team's fanbase that is quickly developing a very crappy reputation.

(As a side note: Can we retire the word "hater" from the lingo any time soon? I've been called it quite a few times in recent weeks because I'm a Canadian who refused to support the Canucks. I can take the heat; it's just a stupid, stupid term. It conjures up this image of an infinite amount of bitter angry people whose sole existence is to tear down a team. The term is a boogeyman, and it allows the speaker to neglect legitimate complaints against them or their team. The huge amount of Canadians who turned against the Canucks didn't do it for nothing. There's a reason why people don't like the team, and they shouldn't be dismissed as "haters". As a Leafs fan, I can tell you, there is no shortage of people who dislike you, but it won't make anything better by vilifying them. Lay off the word already.

2. The team itself has a culture of playing the victim. It's a team that dives more than most, plays dirty like the rest of them, and then complains about reffing afterwards. No, Boston was not dirtier than the Canucks this final; it was pretty much equal. Nothing wrong with playing dirty, it's part of hockey. No, the reffing is not lopsided, has not been lopsided for however many dozens of years the Canucks seem to think it has been. Every time they complain, the management looks like an only child throwing a hissy fit, and I can't support a team with that kind of culture.

The Impending Summer of Nothingness

Oh God. So, the playoffs end, and then we enter a window of a few weeks where hockey fans cling to news. First, teams can start buying out players they don't want. Second, they can start trading again. Third, the NHL Entry Draft happens  in about a week, and that's always fun to keep an eye on. Fourth, and most exciting, is that Free Agency starts on July 1st. After that, crickets. Nothing. No news until training camp some time in the fall. It sucks. I don't understand people who complain about hockey being played into the summer. Hell, I'd have hockey going year round if I could. That the long months of no hockey news will coincide with hurricane season here doesn't make it any better (or maybe it's a blessing, so I don't get a power outtage in the middle of some rockin' news).

The Future of the Leafs


I've been a Leafs fan as long as I can remember, but this year I really stepped it up in terms of a somewhat sad knowledge of the team. It was definitely a strange year to become obsessive: we didn't make the playoffs, but the team seems to be solidifying in many ways, and we're beginning to see the foundation for many years ahead. I was happy to see Reimer and Gunnarsson get re-signed, both at good prices, and here's hoping they get Schenn (I predict 4m/ 4 years), MacArthur (2.5m/ 2 years), Bozak (2m/ 2 years), and Brent (1m/ 3 years) back.

Some predictions for this coming year:

-I think they'll sign Brad Richards. Burke tends to go big or go home, and by this point he would have refuted it. If they get him for an appropriate deal, they'll have enough left over to give Grabovski and Kulemin a raise next year when their contracts are up. And then we're in sexy awesome times.

-If they do sign Richards, I think they'll make the playoffs. They'll have two legit top lines, a fourth line with some serious sandpaper, and a third line of pests and prospects. Their defense is a little thin right now, unless Aulie and Gunnarsson really stay consistent, which I doubt considering how young they'll be. Here's what the team could look like:

Phaneuf - Aulie
Schenn - Gunnarsson
Lebda - Komisarek (this line sucks so hard, the only reason why the defense makes me nervous)

-Last prediction, and this one's bold: watch for a prospect named Matt Frattin to do really well, maybe even make the Leafs roster by the end of the year. I only saw him in one game in a Leafs uniform, but damn he looked good.