An Epic Hockey Game, our Return from Pagua, and Visions of an Unlikely Future

Before I delve into our three nights at Pagua, a quick note: my hockey team - We Boned your Mom, After we Wined and Dined her, and we Don't Plan on Calling her Back - played an important game yesterday evening against Get in the Van we Have Candy. Our two teams are always at the bottom of the league, but we seem to have a very similar skill set, and a rivalry has kind of formed between our two teams. Basically, whomever won this game got to go to the playoffs. 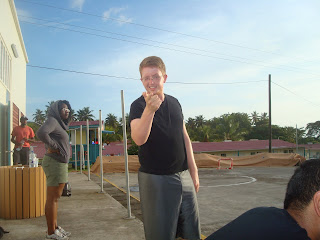 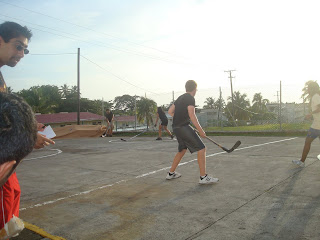 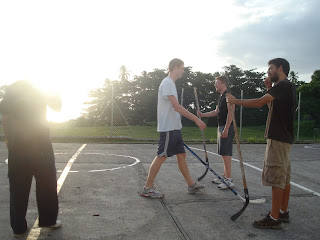 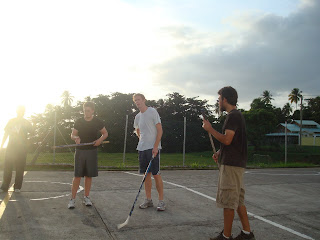 The first ten minutes was neck and neck, with no goals scored but some good give and go. Then we scored three goals in a row. By half time, we were up 4-1. We held them off pretty well for awhile after that, but after a few remarkable plays by their leading ladies, they tied it up 4-4. Then we pulled ahead 5-4. And with one minute left, they tied it 5-5. With the seconds winding down, neither team wanted to risk losing, so the ball kept getting iced. The game was called a tie, and the ref informed us that the next tie breaker in the standings would be whichever team scored more over the entire season. In this category, Get in the Van we Have Candy had a small but significant advantage. After some discussion, however, both teams decided to go to overtime, for a conclusive victor. And two minutes later, our own Arthur, the man who had never played hockey before this semester, scored the winning goal for We Boned Your Mom, and we declared a 6-5 victory after what was honestly one of the most exciting ball hockey games of my life.


In less exciting, more relaxing news, Denise and I just got back from a weekend at Pagua Bay. For those who have never been, Pagua Bay is one of the nicest hotels on the island, and it has an excellent restaurant. One of the greatest things about spending a few nights there, is that the owners spare no expense for quality: in Dominica you get used to the second, third, or fourth best options for most things. At Pagua Bay you feel pampered, and so we spent a weekend there as a break from the grind here in Picard.


Pagua Bay is run by an American couple, who are very pleasant and very interested in making sure you have a great time. As far as I know, the woman's background is that she used to sell fine wines, and the man made a fortune off of some dot com. This is all just word of mouth, though. I guess they started the place more as a project for themselves, since they were more than comfortable.

The place is intriguing, and it reminds me of something my father asked my classmates when he spoke at my graduation: if money weren't an issue at all, what would you do? (Incidentally, one of his favourite responses was an older gentleman who said he would spend all day making fishing tackle.) The concept was something Denise and I spoke about over the weekend, especially since we're both very homesick, and it lets our imaginations run wild. We both agreed that we would start a cafe on Main Street in Vancouver, though we had different visions. I'll leave her to describe hers if she wants to later, but below is a quick vision of what I would do if we were comfortable enough that we didn't need to worry about money.

My cafe would be somewhere on Main Street, which is where Denise and I lived for a year. To be honest, it would be very similar to one that already exists near there, called Our Town. Lots of wood, very laid back, with a good mixture of comfortable couches that you'd never want to leave from, and tables and chairs for a quick chat. There would be two rooms, with the cafe bar in between (kind of like The Grind for the Vancouverites reading this): one very relaxed and comfortable, wherein live performances would happen from time to time (nothing loud, maybe some dude with a guitar), and a second designed for people to study or meet up for a talk. And lots of outlets. We would serve all the usual high quality coffee and espresso, loose leaf teas, pastries, and two or three local beers. The walls would be covered by the works of a local artist, and they would change every two weeks (I like the idea of a consistently shifting aesthetic). My favourite part of the cafe would be a shelf where people could leave or take books as they please, and I could periodically slip in books that I want people to read, or ridiculous trashy ones that are dirt cheap at a nearby used bookstore.

Okay, to be honest, I know there isn't a shred of anything original in my vision. But I want it!

What would you do if money weren't a problem?