As Denise and I approach the end of our first year in Dominica, it's a strange feeling to look back at all the decisions we've made, and how they affected our lives. I remember getting a call from Denise when I was at work over a year ago, and she told me that she was accepted to Ross. I told my boss that if anyone wondered why I had a shit-eating grin on my face all day, that was why.

While we've made some other important decisions since then (cough marriage cough), perhaps nothing is as big as the one we're starting to deal with, and that is what to do for fifth semester. For those who are unfamiliar with the Ross schedule, students are meant to spend sixteen months in Dominica (sounds like a good name for a blog...), four months either in Florida, Michigan, or Dominica, and then another sixteen months doing rotations in a variety of different cities, most likely New York, Chicago, or a few places in California. So for us, we have to soon decide where to spend months 17-20.

Up until recently, it has always been a Florida vs. Michigan debate. Why would we stay in Dominica any longer than we need to? Neither of us is particularly fond of the place, though I like it better than Denise. Last week, however, we had a brief talk, and suddenly Dominica is the most likely. We haven't made up our minds, but here is our logic on each place:

Miramar, Florida was always a dark horse for us. Honestly, the only two draws were a higher concentration of Starbucks for Denise, and proximity to the Florida Panthers (plus their four games against the Leafs and six against Winnipeg). Other than that, the rent is astonishingly high (I've heard an average of around 1500 US per month for an apartment), and there doesn't seem to be any academic advantage to going there. We would also probably need to get a car. If anything, the beaches and general infrastructure would likely distract Denise. 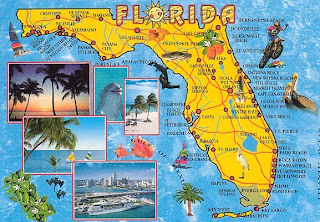 Saginaw, Michigan is tempting. Not only because it's mentioned in Simon & Garfunkle's "America", but because it's closer to Canada, it's cold, and it would only be a few hours from Red Wings games. For Denise, there is the ever important proximity of Starbucks, and other deliciousness. The rent is supposed to be much better than in Florida (closer to around 600 US per month). Like in Florida, we'd have to get a car. To be honest, we have no beef with Saginaw, but when we took a step back, Dominica just makes more sense.


From an academic perspective, our understanding is that the three locations are pretty much on an even keel, except that in Dominica there are fewer distractions, and the clinical experience is better. In the end, our desire to stay here is based mostly on logistics. We're already here. This may sound like laziness, but I've moved enough times in my life to know that it is stressful, especially internationally, and if it can be avoided it should. Moving from here to Michigan for three months, then to Vancouver for a month, then to God knows where else after that, well it all sounds like a heart attack. If they're all about the same, why not skip a step and avoid the anxiety? Another important aspect is the ability to avoid the US for as along as possible. With respect to my American friends, the longer I can avoid living there, the better. This is partly because dealing with customs, especially as a Canadian spouse who doesn't have any reason to come to the country besides being a husband, is a nightmare. I also only have a right to live in the States for six months in the span of a year, and the longer we can push that back, the more time we can spend together.

We're not huge fans of this place, and we miss Canada, but is that enough to get out of here sooner than is needed? We have an apartment we like here, and we're invested in the community (though a large part of that will leave for fifth semester). We haven't made up our minds yet, but right now, this country is suddenly looking very attractive.

It's a tough call.