At the Prep School there's a lovely tradition: since the staff and children rotate so often with the ever changing student body, the school takes some time at the end of each semester to honour departing students and teachers. They're a pleasure to watch, because it creates such great catharsis, as anyone can say a few kind words about whomever is leaving. Denise was there to take pictures and video, but unfortunately it's unethical for me to post videos or photographs with students in them without parents' permission, so we'll have to forego that. I can, however, show the basket and the letters the students wrote. 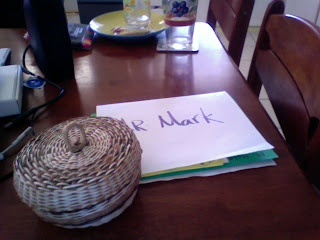 It's a humbling experience, to sit in front of a community you've been a part of for over a year, and hear them talk about how you've contributed. I can be a pretty talkative guy, and I like to tease, but when it comes to accepting compliments I tend to become shy. I don't know how to take genuine kind words (my instinct is to make fun of everything), so I smile, nod, and say thank you. Afterwards, one of the teachers I work closely with came up to me, punched my arm, pointed a finger at me, and laughed.

"Ha ha! You almost cried! When have you ever been shy? Ha ha ha."

Apparently some of the teachers in the crowd got a kick out of the fact that I was lost for words. It's only fair that I get my comeupance: I talk a lot of smack at the school.

It was a fantastic way to leave the prep school, as I dwindle my hours there. The things that were said were heartwarming and kind. Amongst my favourites would be from a girl in pre-kindergarten, who said "Mr. Mark is a nice boy."

Also honoured was Brandi, a good friend of mine here, for her work with Jack, who tore down the house when he said goodbye to her. I'll miss working with her, and I'll definitely miss working at the school.
Posted by Mark and Denise at 7:13 AM