My Newfound Fat Reserves are not Keeping Me Warm.

Ok, we're having some confusion about the followers, but I'm pretty sure that Amanda is a new follower, at least officially. So welcome Amanda! You're not only pretty cool for willingly marrying one of my best friends, you are now part of a very exclusive blog-following club.

So I feel fat and cold. Welcome to Winnipeg. But we'll get to that in a minute. 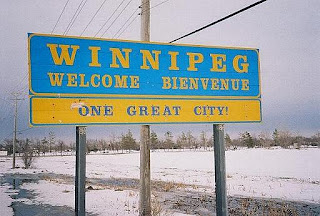 Our trip home was one big pile of flying. We connected in Barbados again, just as we did last time, and just as we will next time. A strange thing happened this time though: I was thoroughly unimpressed. The first time we were there, it was a nice gateway into Dominica; it was hot as balls, but had the amenities to not throw us into complete shock. Our return visit was different. Maybe it's because it was Christmas time, but Barbados was a tourist trap. The only difference between being in North America and being there was that they've got hot weather and beaches, which, frankly, I'm not too keen on. Perhaps one of the most unimpressive things was an unexpected emotion I felt: I missed Dominica. For all my complaints about the island - and they are all legitimate - there is a rawness and simplicity to the island which suits me well. Barbados seemed to lack a strong sense of itself this time around, as if it's sole purpose is to make money. Love it or hate it, Dominica has set up pretty strict laws to protect their culture and their environment, and the difference was tangible.


Back to me being fat now. Every year at Christmas I come home with a mentality of: "Hey, I've been away from Mom's cookin' for awhile, so I deserve to treat myself just a little bit." Then I gain some weight, kick myself in the ass, eat a little less and exercise a little more. Not so this year. This year I have the above mentality, dangerously mixed with, "Fuck it, when's the next time I'm going to be in North America? Nom nom nom nom nom." Exercise is not happening. You know what is happening? Beer. Scotch. Chocolate. Popcorn. Milk. Seafood. More Chocolate. In no particular order and usually cooked in a pile of butter. And so I grow larger.

It is also, as mentioned above, very cold here, but that's a given. Denise is coming soon (oh hey, if you haven't read the post below, I suckered her into agreeing to marry me) and I doubt she'll make it through here alive. Or at least without significant frostbite. Good thing she's a doctor.
Posted by Mark and Denise at 12:59 PM