So we've got two new additions, and I'm pretty sure they're my fine cousin Kendra, and my fine soon-to-be-cousin-in-law Denine. Welcome to the blog, and our family of 38. If I'm mistaken in labeling either of you as newcomers, please forgive me: I find the "following" thing both baffling and flattering. 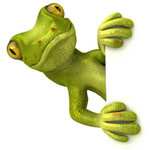 About a week ago Denise gave a small shriek as we were getting ready for bed. The reason? A little baby gecko slithered into a crack in the doorframe by our bathroom. In my manliness I grabbed a container and a pointy object, but the thing was long gone, so we soon forgot about it. In our last apartment, we'd had mice to deal with, which caused all sorts of anxiety for us when we slept, but we were oddly okay with having a baby gecko around. I guess they're just that much more lovable. And mice move so fast I can barely see them, which is creepy as hell.

A few days later we noticed the gecko lurking in our shower...daily. The dude never left. At first this was a little creepy; I personally didn't mind him there, but I put a cup over him while the water was running, to keep the little guy from scurrying up my leg. Now, though, we've gotten used to him. In fact, we've named him Timothy. Into the shower I'll hop, say "Hey what's up Timothy", and then after either Denise or I are finished, we'll leave some food in there for him to eat. Usually some leftovers from breakfast. He's like a pet!


The alarming thing, I suppose, is that this little thing was alive and well long before we started leaving him bits of toast. What, exactly, was/is he eating in our shower?
Posted by Mark and Denise at 5:20 PM