The Seven Phases of Denise

Like many a natural phenomena, the study habits of Denise have an ebb and flow. After three semesters of consistent exams, I've gotten to a point where I can predict her moods from about a week away. I should be keeping actual data. It's very frustrating for her, because I'm definitely not putting as much effort into pepping her up as I used to; we all know she'll do well, and by now I know what emotions she's going to have soon anyhow. The cycle goes something like this, in seven phases, whether starting from the beginning of a semester or right after a mini:

Phase One: The Honeymoon

No matter how often she kicks herself for doing it later, Denise will slack off in the beginning of the block. To be fair, there's no rest period between exams, so it's important to take a few days to yourself and reset the clock, especially if you're basking in pretty good marks. Regardless, this is the period, relative to how long away the next exam is, where Denise is more likely to shrug off studying and watch a movie, Skype with friends, or get caught up on wedding planning. Again, it's hard to blame her for doing this (she genuinely works insanely hard), but she always, always regrets this phase by the next one. 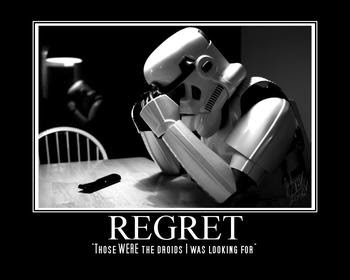 Daunted by how much work has piled up while she watched Wife Swap on TV, Denise wallows in self-pity for a few days. This is because she'll dabble in studying a bit, realize how much she slacked off, and enter paralyzing anxiety.

This is where we have the conversation (I swear to God, it's the exact same conversation. I'm thinking of taping it and playing it for her next time), where I remind her that she's super smart, and that it's not as much work as it looks like, and once she makes a study schedule she'll see that it's doable and she'll calm down. This is where she'll nod vigorously and then sigh, the realization of how much work there is to do becoming apparent.

By far my least favourite phase, and the one to which every spouse can relate. After three semesters, she's figured out her perfect study schedule, and this is the time when she rocks it: wake at 8am, study till around 11, eat and relax, take a nap, do light studying in the afternoon, eat dinner, and then hardcore studying from around 8pm to 2am. Night time is her forte. This is where she gets on a roll, starts catching up, and becomes a lot more robotic. You can definitely tell the days when she hasn't spoken to a human being, because she doesn't make much sense, and giggles at absolutely everything, whether it's an animate object or not.

This occurs when she can easily count the hours until the exam, so about four or so days before. Even though she'll be on or only slightly behind schedule, she'll feel as if she's nowhere, and she'll curse herself for ever allowing Phase One to happen.

This is where we have yet another conversation which I might as well record, wherein I remind her of how smart she is, and how she's almost done, the end is nigh, her record shows how well she does, etcetera etcetera. This talk takes a little more convincing, but inevitably she essentially gives herself the exact same talk I just gave her, she gives her head a shake, and gets back into it. This'll happen every single day, sometimes twice.

The shortest of the phases, this can range from the night before the mini, or two minutes before, but at some point Denise realizes that everything that could be done has been done, she can be no more prepared than she is, and she simply steels herself for the test.

Thanks to Ross' stupid new system, which paradoxically takes longer to inform the students of their marks despite it being electronic now (dumb dumb dumb), this phase lasts about a week. Until her marks are posted, Denise's emotions gradually slide from "meh, whatever, it's done" to "holy shit I failed, we have to go home". The sooner the results come the better for my sanity, as her predictions get more and more outlandish. 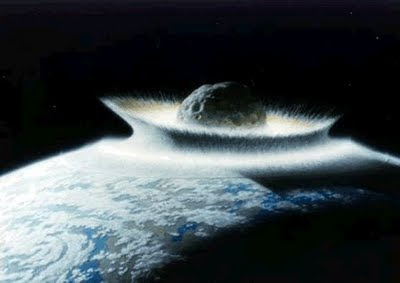 Phase 7: Informed Aftermath and the Transition back to Phase One

When the day finally, FINALLY arrives, and she gets an email with her mark, the cycle is thereby fulfilled. The result is always good, and often great - an unimpeachable fact that she somehow forgets every time Phase Four rolls around. Her mark is usually accompanied by a giggle, a shriek to celebrate, then a very very phoney humility.

She always does great.

And so we celebrate, and she relaxes, until she's well into Phase One again.

Only one more semester of this. If anyone is interested, here is what her life looks like in graph form: 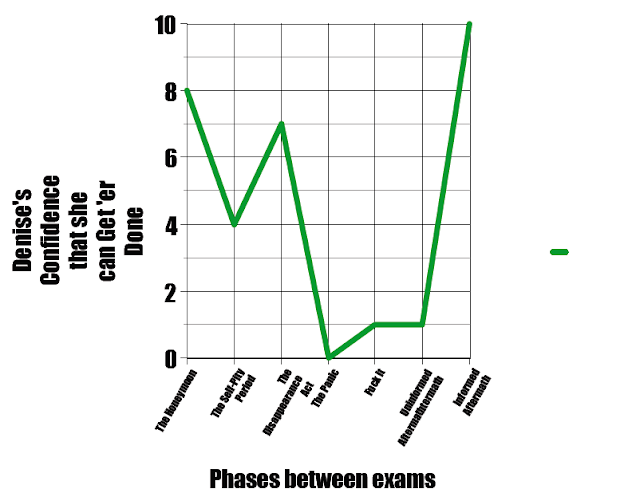