The Attack of the Cows

Two nights ago, Denise and I were returning home late from campus. Normally we take the shuttle all the way to our house, but that night it was easier just to get off at a neighbour's place, and walk half a block. Little did we know the obstacles that were in our way. 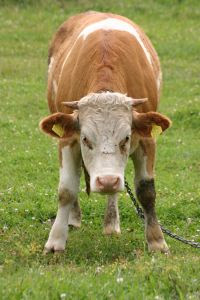 Three cows lined the side of the road, like an honour guard welcoming us home. One of them, as you can see in the video below, had horns over a foot long. As we walked past them, two of them suddenly walked right towards us, as if to attack! (cows can barely walk, so any attack is really more of an aggressive saunter.)

We had to scurry through the protection of our gates, as the three cows menacingly followed behind us. We don't know what spurred them on; normally they stare blankly ahead and barely acknowledge your existence. For some reason, that night, they charged us. Our very lives were threatened.

Afterwards they just hung out outside of the gate, and we decided to take a video. Behold my magical editing powers! Also included, tacked on for ten seconds at the end of the video, is a clip of a symbiotic relationship happening with the cows. Herons hang out around them, often riding on their backs, because they eat little bugs that are on the cows body. Cool, eh?

http://www.youtube.com/watch?v=pJG5oNxrHNQ
Posted by Mark and Denise at 9:16 AM