Before I begin, I am supposed to holla at our "number one follower" Jocelyn. Joss, you light up our lives!

On Friday, Denise took part in the White Coat Ceremony. The event is historically quite recent; Columbia started it in 1993, and then several other universities have done it since. It is the university's formal way of initiating its students. There were several speeches, then all the students are given a white coat by the faculty, and then they all rise and recite the Honour Code (this basically states that they won't pretend to be doctors while they're in school, and will act professional). 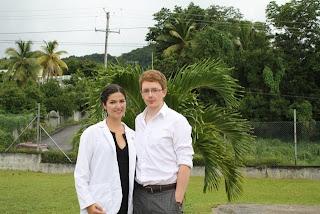 There were several highlights. The Prime Minister of Dominica attended (swear to God), and he turned out to be way cooler than our Prime Minister. You can see him speaking in the video below. He's very calm and very intelligent, and seemed kind of shy getting the attention he did when he walked into the room. He's apparently the youngest head of government in the world, at 38.

My favourite part of the ceremony was when one of the speakers spoke eloquently about how White Coat Ceremonies are often wrongly interpreted as elitist, creating the illusion of a divide between doctors and mere mortals, when really they're about going through a journey. Then, as they had students came don the coats, they played Queen's "We Are the Champions" on repeat. This island really needs to stop with the irony, it's killing me.

Afterwards there was delicious food, the tastiest of which was a pastry that was essentially a Boston Cream donut. Mmm, pastries that are otherwise rare here. Mmm.

Below is a video of three parts of the ceremony: the entrance of members of the army, carrying both the Dominican flag and the American one (this was followed by the anthems of both, about which I want to make two comments: First, the pretty large portion of Canadians in the room were somewhat miffed that no Canadian anthem was present, considering Ross isn't even technically an American school. Second, the anthems' juxtaposition was hilarious. Dominica went first, and their anthem is this lovely, Caribbean-esque song about how their forests and rivers will provide them with the happiness to love God, followed by the American one about how they kicked ass in a war). Then there's the speech by the Prime Minister, and Denise accepting the white coat.

PS. Welcome to the family of followers, Katie and Sam! We still don't know what it means when you're following us, other than you seem to think we're pretty cool.
Posted by Mark and Denise at 6:34 PM