More cows, a job, and a follower

The cows here are getting much more bold. Now they hang out in groups in the middle of the road, and the bulls stare at you as you walk by. Yesterday I saw two cows standing together with their heads right next to the door of a shack - there was something eerie about it, as if they were awaiting instructions from their master within. This is going to be a very interesting year. 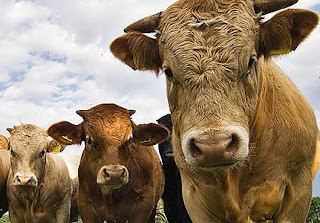 I started a job yesterday, at a place called Island Thrift. We hang out on campus, outside under shade, and sell random things that we've imported. It's pretty laid back; people come and go, and I get to read my book while I work (I'm almost done The Girl with the Dragon Tattoo). Meanwhile, I'm waiting to hear back from Ross Prep School, which won't be for another week, about a possible position there, likely volunteer. So far so good. Spouses here (again, I count as one of them) are a very mysterious group. I don't know what it is they all do, exactly. Some have jobs at the Prep school, or other places, but for the most part I think they just hang out, and use the time on the island to play tourist around the island. Or you know, be parents. Lots of children here.

Finally, it should be noted that we officially have a follower on the blog. We don't know what this means, but to our one true fan out there, you rock Vanessa!
Posted by Mark and Denise at 5:55 AM