Despite all the things that I miss about home (namely Staples, Starbucks and sushi), Dominica does have some strange advantages.
For example, it is cheaper to buy a bottle of Diet Coke than a can.  The reason for this is that there is a Coke bottling factory on the island (aka. my own personal Mecca).  It costs more to import the cans than to buy the Diet Coke that was bottled an hour away.  The "Spouse Association" does bi-weekly trips to this factory where you can pick up flats of Coke products....guess where Mark is going next week.....
Another thing is the fruit here - it's like super fruit.  I don’t know if it’s because it’s organic or what, but I have SO much energy after I eat a piece of fruit here - way more than I got from fruit back home.   I had a glass of unsweetened grapefruit juice (which I later sweetened with my emergency Splenda supply in my bag), and it was like someone had stuck me with an EpiPen.  I also tried a new fruit today called kenèp.  It’s like a candy.  You peel off the hard green shell after you break it with your teeth, and then you suck this delicious mango-grape-ish fruit off of the seed in the middle.  It’s heaven. 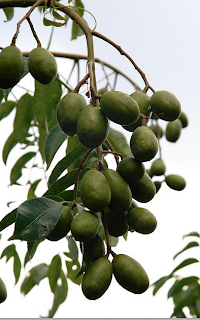 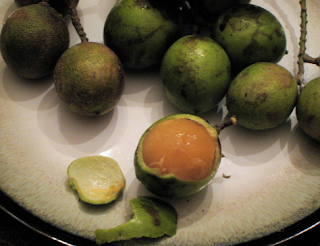 In other news, I am now 3 days into medical school.  I’d be lying if I said it was  everything I hoped it would be.  I don’t think there was any way I could’ve prepared any differently, though.  It’s really just a matter of staying on top of things and not letting yourself fall behind.  If you do, you will never catch up.  There’s simply just too much to know.  That being said, I think I’ve learned more in the last 3 days then I did in an entire semester at UBC.
As a wise man once said, I just gotta keep on keeping on.

The kenep will help.
Denise.
Posted by Mark and Denise at 7:01 PM